Ulysses S. Grant has his fair share of detractors.

Our 18th president and victorious Civil War commander has been called crude, stupid, and a drunk. I would suggest that his reputation for drinking, while based in truth, is overblown. 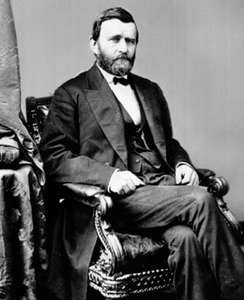 I think we should also bear in mind that Grant was, sober or otherwise, pretty good at killing enemies in war and at herding states from the White House. And he made quite a few insightful observations. Here’s one example of a Grant smartitude:

Born in 1822 in Point Pleasant, Ohio, Grant died from throat cancer in New York 63 years later. And yes, tired old jokes aside, he really is buried in Grant’s Tomb, alongside his wife Julia Dent Grant.

Why the sudden fascination with Grant? Today marks his 197th birthday: A good day to contemplate what America would look like today if Abraham Lincoln hadn’t found — after numerous failed choices — the General to whup Bobby Lee’s Army of Virginia.

Claims to fame: Survived 68 years with open eyes and ears. Opinionated wordsmith. Unapologetic Christian conservative. Quote: You break it, you own it. View all posts by Bill Amick